Meet B2 and BRAVE, the Chicago born but LA living dynamic brother-duo that’s taking Hip-Hop by storm with the release of their first single & music video “Do the DASH“. B2 and BRAVE are definitely atypical in today’s scene. They’re displaying catchy melodies on top of impressive verses and execute at a high level with a veteran level of composure. Did I mention that B2 is 8, and BRAVE is 6 years old? 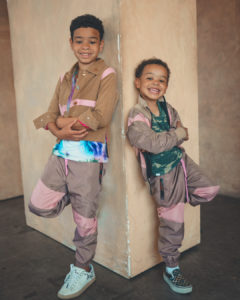 The record starts with older brother B2 kicking off an illustrious verse dropping bars about his fun lifestyle tripling as a rapper, skateboarder, and model. The B The Curator produced record sets the tone for the two to unleash their talent. Did we mention that B The Curator is also their father? Yes we know, they’re officially the coolest family in Hip-Hop.

With the core message of the song empowering kids around the same age to overcome bullying, the B2 and Brave combo do it in a very catchy and harmonious manner. Although big brother B2 sets the tone early in the beginning, little brother Brave is nothing to take lightly. The 6 year old rapper displays a confident strut and lets off rhymes that mirror his brother’s verse and only enable their rap chemistry.

We even had the chance to sit down with B2 and Brave and ask them about the inspiration behind their stage names,

My name is Brandon like my dad, so they call me B2, and my brother is named BRAVE.
We let kids around the world know that they can also “Be Too BRAVE” when dealing with
being themselves. Being a kid is hard sometimes, and if you don’t have a brother that
has your back, we’ve got you! – B2 and Brave

As the two work on their much anticipated album, “The Adventures of B2 and Brave”, they’ll be busy carrying the weight of Hip-Hops greatest under 10 dynamic duo in history. They’re truly a beautiful example of youthful Hip-Hop, with the kind of wholesomeness that will adore you & at the same time demand your respect for their talented rap skills. There is a lot more in store for B2 and Brave, and this is only the beginning of a long, fun, and highly successful journey.

Be sure to follow B2 and Brave on Instagram now so you never miss another Bop again!

Stream the music video for “Do the DASH” on YouTube below:

If you liked this artist, follow our Under The Radar column to find more dope talent before your friends do.